San Francisco’s corporate holiday party scene this year is bigger, slightly better and more expensive than in recent years past, according to party planners, venues and some candid attendees.
“The season for the large holiday party has definitely returned,” said Global Gourmet owner Laura Lyons.

Business at the company is up by more than 20 percent, she added, boosted by an upswing in spending from corporate clients. In fact, this party season is the busiest Lyons’ company has ever experienced in its 15 years in business, she said, as it hosted 32 events last week alone that ranged from 300 to 6,000 guests.

And it’s not alone. “All the major catering companies are experiencing blackout dates this year,” Lyons said.

While she wouldn't name names, Lyons said the company caters parties for some of the biggest names in tech, and added that fast-growing startups have been a source of much of the company’s new business.

One such unnamed tech company that recently went public (hint, hint) is having a party at City Hall that will include “very elaborate” entertainment and fancy perks such as liquid nitrogen cocktails, Lyons said. Other parties Lyons' company has thrown include themes around a Renaissance masquerade ball and a Candyland spinoff, with budgets that range from $90 to $275 per person.

“It’s great,” she said. “These parties are wonderful for the employees to get together and have a large celebration in their honor.”
Bookings at the Metreon’s City View — one of the hottest event spaces in the city — are up 50 percent over last year, according to general manager Adam Kamlet, with some sparing no expense. “Companies are starting to spend more money,” he said. “Some parties are really extravagant.”

One party, for instance, had an aviation theme that included big blowing fans to make guests feel like they were flying, while another winter wonderland-themed party created simulated snow.
Events business at the Exploratorium also is up 50 percent over last year for December alone. Renting space there ranges from $7,000 to over $50,000.

Other booked-out venues include the de Young museum and City Hall, which ranges from about $10,000 to $30,000 for a night.
While bigger and in some cases more extravagant than in years past, the events are not overly opulent, party planners said.

Jon Kimball, general manager at the Westin St. Francis — where event business is up 30 percent over last year — said the trend has steered to more causal settings and events not because of more careful spending habits, but because “it’s just the style” now. “People are more comfortable in that environment,” he said.

Indeed, Facebook held a party at the Bill Graham Civic Auditorium for a few thousand of its Menlo Park employees that was nothing to write home about, according to one employee. The employee, who asked not to be named, said the party was “pretty low-key,” with no real theme and only a three-person band and DJ for entertainment. The budget, she said, also remained the same as last year — “which is very financially responsible,” she said.

“Honestly, we’re just a bunch of nerdy tech employees — we don’t need much,” she said.

The same doesn’t go for all tech companies. One of Google’s parties — it has several because it has grown so big — reportedly had an “It’s a small world, after all” theme, which included hired actors dressed up as people from different nationalities that was considered insensitive by some attendees, according to one partygoer.

The Bently Reserve, which has been a popular venue for parties for Google and Yelp, recently held one event for a tech company that was “very extravagant and very gorgeous,” according to event and sales manager Vivian Perez.

The décor for the party included plush leather furniture seating and Persian rugs to cover the floor, while the theme included performers to act out characters from the movie "Pulp Fiction."

The California Academy of Sciences, another popular venue, said it’s hosting a tech company that plans to bring in an inflatable life-sized snow globe for guests to step inside and take photos and has commissioned a bar made entirely of ice. Another company it recently hosted threw a party that hired stilt walkers, mermaids and created a 3-D maze installation. 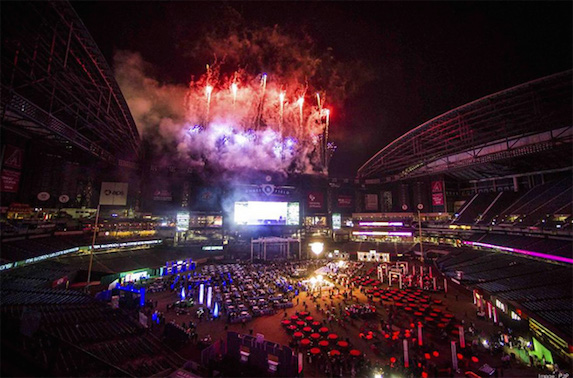