SAN FRANCISCO—For the 20th anniversary of its annual Wine Star Awards on January 27, Wine Enthusiast wanted to do something special: Rather than simply highlighting the 2020 winners, the magazine also paid tribute to the last two decades of winners—most notably through an eye-catching Walk of Fame-style entryway that featured the names of past recipients in stars on the ground.

"Our chairman and C.E.O., Adam Strum, wanted to be sure we recognized all winners past and present in a very impactful way," said Jen Cortellini, director of special projects and events for Wine Enthusiast Media. "For the first time ever, we created a star walk—inspired by the Hollywood Walk of Fame—where attendees could literally walk amongst the almost 300 stars of the past and present, creating memorable photographic and Instagrammable moments."

As the event's 1,000 guests entered the cocktail reception, held at the Palace of Fine Arts in San Francisco, a 30-foot, double-sided Hall of Fame wall also paid tribute to the awards' history with a timeline of winners and previous host venues and cities. "It beautifully captured the evolution of the event over time," explained Cortellini.

The black-tie dinner and award show were held in a design-forward space covered by a canopy of twinkling lights. Cortellini said that the event team was drawn to the challenge of remaking a raw venue. "The beauty of working in a space like the Palace of Fine Arts is that it's a blank canvas, which allows you to build any vision you have," she noted. "We were inspired by the galaxy of 'wine stars' we were honoring, and wanted to create an indoor night sky above the tables to complement them. The twinkling café bulbs created a glamorous effect while efficiently covering the raw space."

"To maintain that black-tie feel, we went with a black and gold color palette and worked luxurious colors like fuchsia, mulberry, and lavender into our florals—which also included gold-painted leaves and textured vases to bring that additional sparkle to the room," Cortellini said. "Once the space came alive and was as elegant and breathtaking as we envisioned, we all knew we nailed it."

Cortellini says that in addition to a focus on sustainability and community impact, that idea of family was a recurring theme throughout the night. "A big focus of this year’s event was recognition of the multi-generational families embedded in this amazing industry," she said. "Some of my favorite Instagram stories posted that night were from attendees who stood next to their parents, grandparents, daughters, and sons on our Hall of Fame Wall, recognizing the years their family members had been awarded a Wine Star."

Scroll down for a look inside the glamorous event. 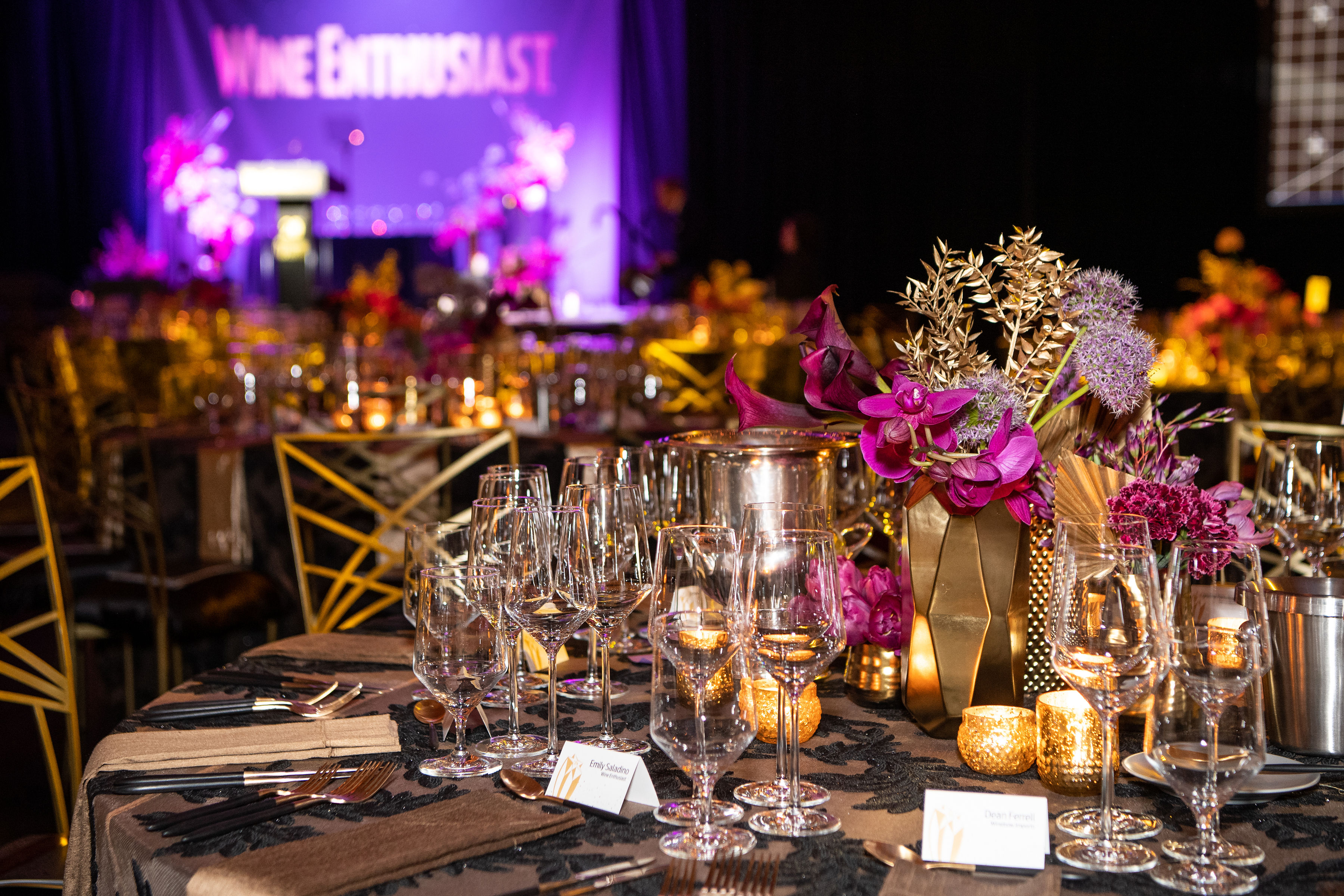