In a post-cronut world, no dream is out of reach.

1. Pop Tart Ice Cream Sandwich (Carl’s Jr.)
Recreate this exactly at home by breaking a Pop Tart in half and sandwiching a scoop of vanilla ice cream in the middle.

4. Bacon Weave Choco-Taco (via Dude Foods)
If you want it, you’ll have to make it yourself. Fairly labor intensive, definitely worth it.

5. Cool Ranch Doritos Locos Taco
The original DLT was unveiled in 2012, but this year brought the Cool Ranch version. Which is better than the (already excellent) original. So, noteworthy.

6. Cinnabon Donut Holes (Taco Bell)
They might not look like much, but these donut holes are oozing with Cinnabon frosting, AKA the best part of every cinnamon roll.

7. Kentucky Chicken Rice (KFC Japan)
This Japanese take on the “Double Down” is a rice patty topped with special sauce and melted cheese, sandwiched between two fried chicken patties.

9. Dorito Bread (via Bon Appétit)
The bread itself is surprising. Even more surprising is the fact that the recipe first appeared not on a kooky food blog, but on Bon Appétit’s website (albeit with the disclaimer that it has not been vetted by the BA test kitchen).

10. The Cronut (Dominique Ansel Bakery, NYC)
Its reputation precedes it. Also, a very long line precedes anyone who would like to purchase one, even six months after its inception.

11. Jack’s Big Stack/Big Waffle Stack (Jack in the Box)
Donut sandwiches didn’t make the list because, eww, but these waffle sandwiches are an excellent extension of the “alterna-bun” trend.

12. Cheesy Bacon Pretzel Dog (Sonic)
No more having to choose a hot dog or a pretzel.

15. Gingerbread Twix
Gingerbread is poised to unseat Pumpkin Spice as the Official Flavor Of The Holiday Season in 2014.

18. Red Velvet Latte (Dunkin’ Donuts)
In retrospect, this was inevitable.

21. Pumpkin Spice Everything
As cliché as pumpkin spice has become, there’s no denying that it’s popular for a reason. Brands figured this out a while ago (pumpkin spice Hershey kisses debuted way back in 2008, pumpkin spice Pringles in 2012), but this year’s crop of pumpkin spice products has been the most impressive yet.

22. 47-Layer Dip (via BuzzFeed)
The most intricate party dip of all time, in honor of Super Bowl XLVII.

27. Ramen Burger (available at Smorgasburg, NYC)
Keizo Shimamoto used to make ramen burgers when he was a chef in Tokyo, but this year he brought the burger — a beef patty glazed with a secret shoyu sauce, topped with scallions and arugula, then sandwiched between a bun made from Sun Noodle’s freshly cut ramen noodles — to Brooklyn, first wowing the hipsters, then wowing the world. 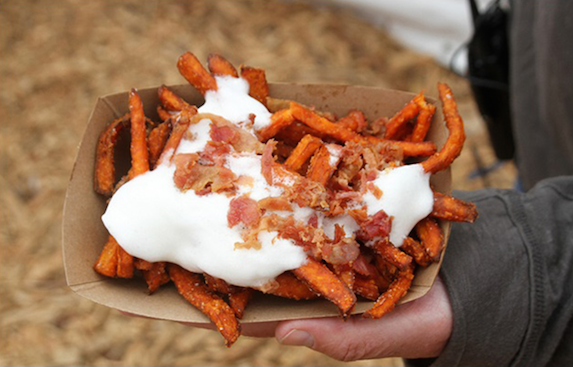